skip to main | skip to sidebar

How long has it been? About 4 years. Yup, that's correct. Whole bunch of change. Where to start? Hmmm ...

Restarting the blog. Less about bicycling. More about ... stuff. Thoughts and whatever. Musings and serious contemplation. And coffee. Lotsa coffee. 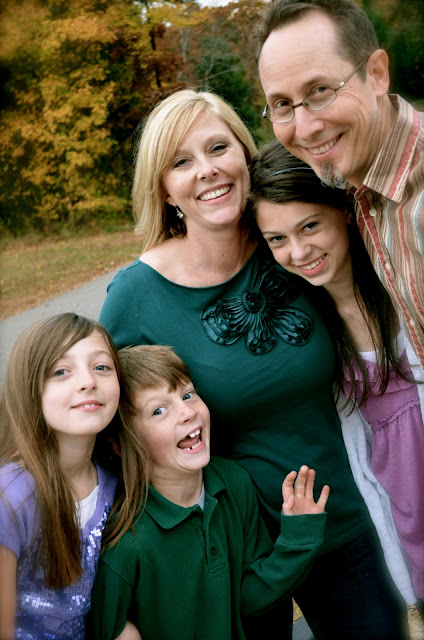 Posted by David Hogeboom at 1:40 PM No comments: 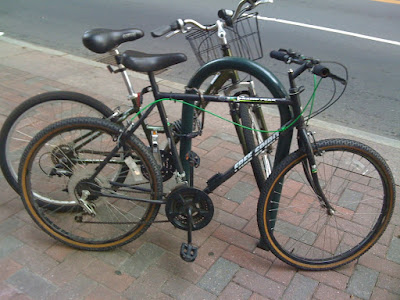 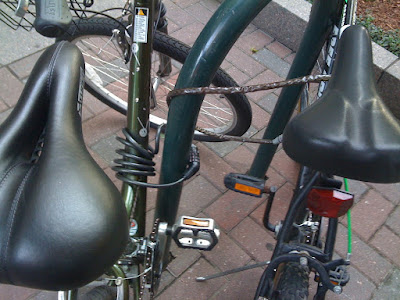 Been seeing quite a few instances of spontaneous trust on display in the Queen city. Bicycles locked to sidewalk racks - merely tethered to the frames.
Granted, these two are in a fairly heavily trafficked area. However, there was a fairly nice ride locked up at my local park 'n' ride the other day. A flimsy cable lock looped only through the frame.
Ah - guess it's not mine to judge. Besides - with all this easy bait out there - adverse selection dictates that sticky-fingered bicycle thieves will lift these before taking on my heavy-duty u-lock and woven cable.
Posted by David Hogeboom at 7:05 PM No comments: 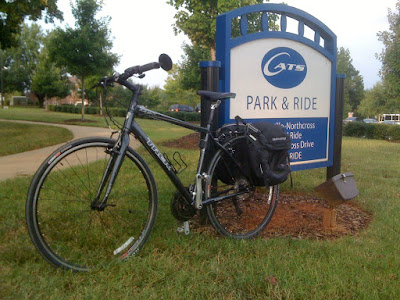 When I was in kindergarten we still exchanged Christmas gifts among students at school. Public school. You drew a name, and as long as it wasn't your own, you bought that classmate a gift up to an agreed upon amount. That year the gift exchange was a roaring success. I made out like a bandit - getting the Matchbox car of my dreams. A Ferrari.
There was, however, one classmate who was not so fortunate. A waif of a girl named Tammy was sick at home and wasn't there to receive her gift. Even worse, the teacher asked a certain young man to courier the present to Tammy's house on his way home from school. Me.
As I trudged through the snow with my friend Tim, it occurred to us that we didn't really need to deliver the gift. After all, who would know? (Remember this is kindergarten, not graduate school.) So we ditched the festively wrapped present in a snow bank and commenced a running snowball fight the remaining few blocks to home.
Fast forward one week. My mother calls me from my room to the kitchen.
"I just talked with your teacher. Weren't you supposed to have delivered a Christmas present to a certain someone last week?"
"Uh ..."
"Think real hard before you answer that question, young man."
"Uh ..."
"Let me show something."
She led me by the hand down the hallway to the coat closet. From behind the knit caps and scarves on the top shelf she produced an unopened box of 64 Crayola crayons. The box with the built-in sharpener! I had been coveting this cache of color for the past year, almost drooling every time I saw them on the shelf at the local dime store.
"This was going to be a present for you," she announced. "Instead, you'll be wrapping it up and taking it to Tammy."
My heart sank and my limbs became remarkably heavy, as if gravity had increased tenfold - just the way my Our Solar System picture book had described conditions on the planet Jupiter. It was my first encounter with the weight of guilt. I cried. It was a hard lesson. I'm sure it was tough on Mom, too.
I've felt guilt a time or two (perhaps more) since then. It comes on my whenever I do the thing I know I shouldn't - or don't do the thing I know I should.
Felt that old pang again today. I racked the bike to the front of the 77X and rode the bus home, and all the way to the park and ride my heart kept saying "you should be pedaling."
Amazing how far tough love and a box of 64 crayons can reach.
(Footnote: For you fact checkers - the Our Solar System picture book was wrong. The gravity on Jupiter is estimated to be about 2.5 times that of the earth. However, since Jupiter doesn't have a solid surface, you wouldn't have anything to stand on to experience this gravitational difference. Meaning you also couldn't pedal a bike on Jupiter.)
Posted by David Hogeboom at 6:46 PM 1 comment:

Up early this morning. I really like that part of the day. Everything's still waking up. Sat on the front porch, sipping some java and reading James Lee Burke's Rain Gods. Classic Jimmy Lee.

Church. Lunch. Time to do a little riding. Explored some of the surrounding neighborhoods and then figured I'd check to see if they'd finished paving the McDowell Creek Greenway.

Hate to to admit this, but I was surprised to find that they had indeed paved the remaining quarter mile stretch past the pond and over the spillway bridge behind the neighborhood. This means that the entire 1.5 mile greenway from Sam Furr Road to Westmoreland is now complete. I guess for some reason I figured that because it was a county government project and all ... well, you get the picture. 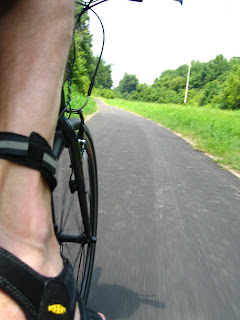 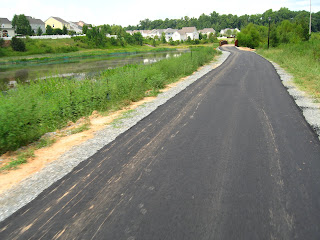 After a spin on the greenway it was time to head to the grocery store for tonight's grillin' bits. I think they're getting used to seeing the "bicycle guy" at the Harris Teeter on Saturday and Sunday. The lady at the self check-out is asking me how the riding has been going. I tell her it's going great and that it burns calories so I can drink the beer that I'm packing into my grocery pannier. She smiles and checks my I.D.. I tell her it also keeps me looking young so that she'll have to keep checking my age.

She smiles, and I can almost read her thoughts. "Sure it does honey, you keep believing that."
Posted by David Hogeboom at 3:15 PM No comments: 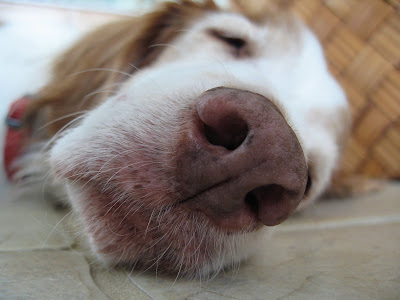 It's hot and humid. Overcast, cloudy, raining. All within an an hour's time. The air conditioner is running constantly and Gracie, the 15 1/2 year-old brittany, is sound asleep on the cool tile of the bathroom floor. Her nose twitches and her paws begin to dance as she dreams of a long-ago quail hunt near Andover, KS. Gracie's 12 years younger, I've dropped two birds in the brush, and she's working a blind retrieve.
Lazy Saturday.
Not much riding today. Did run to REI to pick up a pair of Keen Commuter Bike Sandals. These have been bouncing around in my head all week. Resisted temptation last weekend, but gave in today. Got 'em home and found the extra pair of SH-51 SPD cleats I'd stashed in my "bike junk" drawer. Easy install.
Rode around the neighborhood on the 7.3 FX to test out the feel of the sandals. Like 'em. Comfy, cool, and kewl. Easy on the foot and easy off, but a word of warning - at least with the SH-51 SPDs - it ain't the same popping out of the pedals. Because these sandals are a little more flexible than a traditional bike or MTB shoe, you gotta twist a little more before the cleats pop out of the pedals. Lean up against something and practice clipping in and out before you go for a ride and find yourself falling over at a stop because you can't unclip.
Off the bike, the Keens are a comfortable walk-around, with the cleats recessed sufficiently that you don't sound like you're wearing tap shoes. I'll probably wear these for most of my warm weather weekend errand and recreational rides - using the MTB shoes for colder weather and office commutes.
Well, guess I need to find a cool patch of bathroom tile for my afternoon nap.
Posted by David Hogeboom at 4:05 PM No comments:

Air you can wear 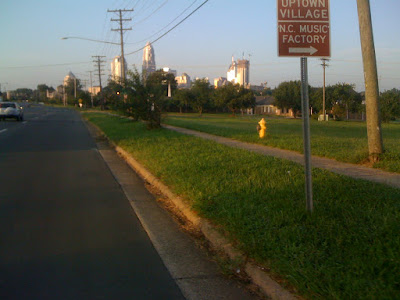 Easy pace this morning on the bike commute into work. About an hour and 20 minutes. Roughly 7 minutes slower than average.

Chalk it up to the drag coefficient of the thick Carolina air, or as we call it around here: "air you can wear."

Unlike the past couple of summers, we've had a good share of rain and humidity. Add the August heat and you've got a thick, soupy atmosphere that clings to you like an amorous frog. Not so bad that it causes condensation on your glasses, but it definitely impairs evaporative cooling on a ride.

All-in-all, still a nice morning for a ride into work. Really liking my Novara Transfer panniers from REI. Good size for the commute - carries my computer, papers, big hairy u-lock, clothing (underwear, t-shirt, socks and tie for work, change of cycling clothes for commute home), and miscellaneous trinkets. I keep a dark suit, two shirts, black shoes and a shave kit at the office.

Also liking my Novara 'Round Town Bike Panniers for weekend grocery and farmers market runs. Holding up well, and carry just enough stuff for the Saturday night grilling session. That includes a six pack of malted beverage.
Posted by David Hogeboom at 8:53 AM No comments:

Was talking with my neighbors upon returning home from the farmers market this morning. Still on my bike, so they asked me where I'd been. When I told them, they asked if I'd used the new greenway as a cut-through to Westmoreland Road instead of traveling the more trafficked Catawba Ave.
Did you say "Greenway?!"
Went inside, made my salsa with fresh goods from the market and figured I'd check out this "greenway" in the afternoon when I made a quick bike run to the store to get chips.
Let me say that I did know that they were re-working the path and bridge that goes around the pond back behind our neighborhood. And I had noticed the entrance to a nicely paved path coming out a wooded area near the Birkdale Village Shopping center and onto Sam Furr Road. But I hadn't be 2+2 together.
Now I have. It's the Upper McDowell Creek Greenway. It's only 1.5 miles long and it's not yet fully completed. But I'm loving what's been done and what's left to be completed. Even bitter, it's connected to my neighborhood and is easy to access. Zoomed it on the way to the store. Took a few pictures. 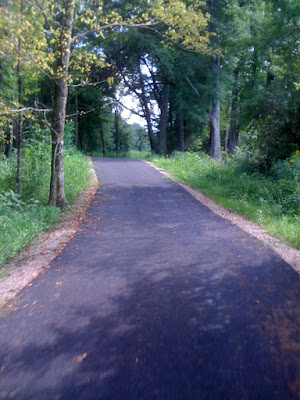 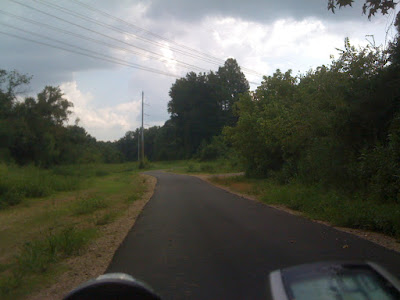 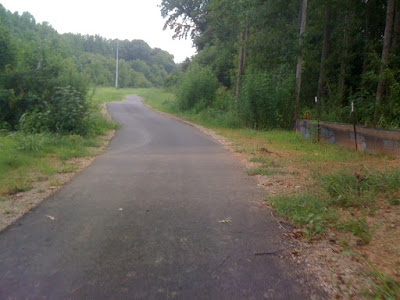 Not a long trail, but a relief from dodging traffic and something I'll add to a nice evening or morning ride.
Also took the time to go to the Mecklenburg County Greenway site to see what else is out there that I may have missed. Turns out there are a lot of planned trails, but very few developed. However, once this is fully developed it will be much easier and safer to get around these parts on foot and on bike.
Posted by David Hogeboom at 4:40 PM No comments: